How Swiftlets Zero in on Home Nest in the Dark 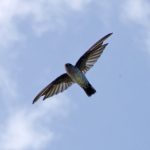 Swiftlets are small birds that live in southwestern Asia and Australia. They make their nests far back in dark caves. These birds have small eyes and the caves are pitch black.

With fast wings, such as swallows have, the swiftlet flies at high speed into the cave. Rapidly it flies directly to one tiny nest among hundreds. As soon as the bird enters the cave, it begins making a series of high-pitched clicks. The little bird has the ability to vary the frequency of the sounds and, as it approaches the wall, it increases the number of clicks per second until they are about 20 per second. The time required for the clicks to bounce off the wall and return reveals the distance to the wall.

Scientists have tried to figure out why the clicks vary in frequency as the bird gets closer to the wall. They eventually discovered that the tiny bird – with a brain an eight as large as your little finger – does this in order to hear the return echo! The problem eis that the click must be so short and so exactly spaced apart, that its echo is heard by the ear of the bird – before the next click is made. Otherwise the next click will drown the sound of the returning echo.

By the way, how did the swiftlet identify its own nest by those clicks? There are hundreds of nests in the cave. Scientists try to solve such problems, but hey are unable to do so.

Somehow, evolutionary theory does not seem to be of any help.

Swiftlets zero in on home nest in the dark