The marsupials are the pouched mammals. Two of the best-known are the American opossum (the only marsupial in North America) and when it is born it is no larger than a tiny bean! It is blind, deaf, hairless, and looks somewhat like a tiny worm. A newborn opossum is smaller than a honey bee, and six will fit in a spoon. There are 12-15 in each litter.

Emerging from the birth canal, this almost brainless baby ought to drop onto the ground and die right there. But no, it holds tightly to the fur of its mother, and slowly crawls a long distance over to the pouch. The mother usually knows nothing about its birth, so does not help it in any way. How does the baby know which direction to travel? 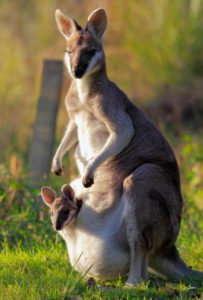 Down into the pouch it goes, and there it fastens onto a nipple. Immediately, the nipple enlarges, locking the tiny creature to it. There it remains for many months as it grows.

The kangaroo makes two kind of milk simultaneously: milk for the tiny baby, and other milk for a young kangaroo hoping alongside. Each kind of milk differs considerably in nutritional content.

[used by permission from the Evolution Handbook – pg 117]