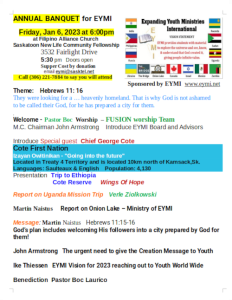 Click the download link to see the full Poster – which includes the full agenda for that evening’s reports and messages.

You may download the full-sized (letter) poster to print out and distribute it where you think others may be interested. This will be an in-person event, so all guests must be able to arrive in-person.

We want you to be able to discover our creation resources more quickly, so here are the QUICK LINKS:

Case for a Creator

Origins – How the World Came to Be

Unlocking the Mysteries of Life

Where Does the Evidence Lead?

You know what kind of times we are living in. So yes, we will have our Annual Banquet with Special Music from Young People, Creation Information, and YOU can be right there via LIVE-STREAM on your Electronic Device. The special link for LIVE-STREAM will show up right here as soon as it is confirmed!

Meantime, here are two PDF posters that you may download, print out and post somewhere to invite others to come attend too.

No tickets to buy – Come, Enjoy, and Share as God Prompts YOU to carry on the ministries of  EYMI.

EYM-GENESIS-CONNECT  (A large POSTER for young People! Click link to open in another tab or window.)

2021-10-ANNUAL-BANQUET-Poster   (see the smaller version below; click this link though to download and print out the full letter-sized poster.

The LIVE-STREAM LINK is HERE NOW in time for Friday October 8th.

(sorry for the delay!)

My wife and I both grew up in Southern Saskatchewan. I grew up both, in the city, and around the farm. 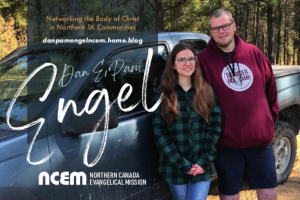 In my teens my youth group did some missions work at a Bible camp in northern Saskatchewan. This changed my life and I said that I would love to come back. Who knew that over twenty years later God would bring me back to the north.

He had equipped with a solid understanding of the Bible through my three years at Millar College and also molded me through various life situations. I hold my class 1A license, and have experience driving all types of vehicles.

Pam had a hard life growing up, but God was there every step of the way. Through unique circumstances Pam had the opportunity to go overseas doing mission work. In this she found out that she has a knack for languages. Pam was able to obtain TESOL certification before teaching in Central America. She had the opportunity to learn Spanish while serving in Central America.

Both Pam and I have our Education Assistant training and both hold a level 1 food safe. Why all this experience and skills? God began equipping us for working and serving in missions.

We have been married for nearly eleven years. For medical reasons we are unable to have kids, but have a passion for them. God gave us abilities that help us in ours day to day operations on the reserve. Currently we work with Children and Youth on a reserve in northern Saskatchewan.

Our Partnership with EYMI has been very rewarding. We have the opportunity to teach creation to these young minds and they are loving it. EYMI has supplied us with material and equipment to share it. We have used the projector and DVD player numerous times. We feel blessed by all the support that EYMI have been over the last several years and look forward to the future as we continue to respond to God’s call the share His Gospel of Jesus Christ to the nations.

The Engels are temporarily on leave from NCEM. (Dec/2022).

Porpoises Have a Marvelous “Melon”

Porpoises (bottle-nosed dolphins) never hurt humans, but crush vicious barracudas and kill deadly sharks. It is sonar (underwater radar) that enables them to successfully plan their attacks. With their high-pitched squeaks, they can identify the type of fish, and measure its distance and size.

Porpoises have a special region in their head which contains a specialized type of fat. Scientists call it their “melon,” for that is its shape. Because the speed of sound in the fatty melon is different than that of the rest of the body, this melon is used as a “sound lens’ to collect sonar signals and interpret them to the brain. It focuses sound, just as a glass lens focuses light. The focused sound produces small “sound picture” in the porpoise’s mind – showing it the unseen things ahead in the dark, murky water.

It has been discovered that the composition of this fatty lens can be altered by the porpoise in order to change the sound speed through the melon – and thus change the focus of the lens to accord with variational factors in the surrounding water!

There is also evidence that the composition of fat varies in different parts of the melon. This technique of doublet lens (two glass lenses glued together) is used in optical lenses in order to overcome chromatic aberrations and produce high-quality light lenses. The porpoise appears to be using a similar principle for its sound lens system! 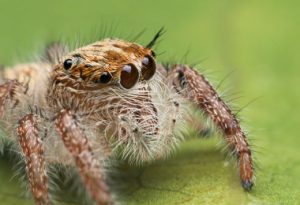 Spiders go higher in the sky than any other living creature on our planet. Here is how it is done. When the baby spider is hatched, he just crawls up to a high point. It may be a grass stem or the side of a tree trunk, or a leaf on a plant. Then he upends – and off he goes!

Even though only a day old, he knows exactly what to do. Instead of a tail, the spider has a spinneret. Lifting it up in the air, he begins spinning his fine thread which catches in the wind and carries it away as the baby keeps reeling it out. Soon enough thread (about 9 feet [27.dm]) is in the air, and the baby is lifted off its feet and goes sailing!

This thread is actually a liquid which immediately hardens when the air touches it. For its size, the thread is stronger than steel, and can stretch without breaking.

Where did the baby learn this? Not from his mother. As soon as he becomes airborne, the little fellow climbs up on the silk line and walks on that fluttering thing as it is flying high! How can he do this and not fall off is a mystery. But he quickly become master of the airship.

Arriving about halfway along the line, he pulls on it, tugs it here and there, and reels it underneath him. In this way the line now becomes a rudder which he uses to steer up or down!

Where did a one-day old, with a brain one-thousandths as large as a pin-head, get such excellent flying instruction? Soon he lands on something but generally only long enough to prepare for another flight, and off he goes again.

Eventually the tiny creature will land. It may be several miles down the road, in a neighbouring state, or on an island far out at sea. Spiders are the first creatures to inhabit new volcanic islands.

“No one has ever found an organism that is known not th ave parents, or a parent. This is the strongest evidence on behalf of evolution.” –
(Tom Bethell, “Agnostic Evolutionists.” Harper’s, February 1985. p.61)

“As by this theory, innumerable transitional forms must have existed. Why do we not find them embedded in the crust of the earth? Why is not all nature in confusion instead of being, as we see them, well-defined species?” (Charles Darwin (1866), quoted in H. Enoch,  Evolution or Creation, p. 139)

“Scientists have no proof that life was not the result of an act of creation.” (Robert Jastrow, The Enchanted Loom: Mind in the Universe (1981), p.19 [a leading astronomer].

“Evolution became in a sense a scientific religion; almost all scientists have accepted it and many are prepared to bend their observations to fit in with it.” (H. Lipson, “A Physicist Looks at Evolution,” Physics Bulletin 31 (1980) p. 138.

Here are some quotes from Physicist and Astronomers, Scientists, etc., that can start conversations. Instead of just throwing the quotes out like a challenge, it would be wise to research the topic enough so that you can answer the questions and comments that the other person will likely raise in response.

“The evolutionary establishment fears creation science because evolution itself crumbles when challenged by evidence. In the 1970s and 1980s, hundreds of public debates were arranged between evolutionist scientists and creation scientists. The latter scored resounding victories, with the result that today few evolutionists will debate. Isaac Asimov, Stephen Jay Gould, and the late Carl Sagan, while highly critical of creationism, all declined to debate.” — James Perloff, Tornado in a Junkyard (1999) p. 241.

“It was because Darwinian theory broke man’s link with God and set him adrift in a cosmos without purpose or end that its impact was so fundamental. No other intellectual revolution in modern times . . . so profoundly affected the way men viewed themselves and their place in the universe.” – Michael Denton, Evolution: A Theory in Crisis (1985) p. 67 [Australian molecular biologist].

“Unfortunately, in the field of evolution most explanations are not good. As a matter of fact, they hardly qualify as explanations at all; they are suggestions, hunches, pipe dreams, hardly worthy of being called hypotheses.” Norman Macbeth, Darwin Retried. (1971) p. 147.

What? Their Kidney is in Front of their Mouth? 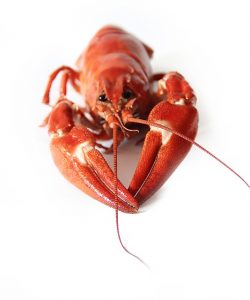 Image by Ylvers from Pixabay

Because crayfish and lobsters live their lives moving backward, they have an unusual internal plumbing system. The kidney is located in front of the mouth, so the gill circulation can carry the wastes away from the body. If the kidney outlet was near the back end as in most creatures, the wastes would be carried to the gills. This perfect design enables crayfish and lobsters to live efficiently, whether very slowly crawling forward or rapidly swimming backward.

Crayfish are freshwater crustaceans resembling small lobsters (to which they are related). They are also known as crawfish, crawdads, freshwater lobsters, mountain lobsters, mudbugs, or yabbies. … Crayfish feed on animals and plants, either living or decomposing, and detritus.

fossil of a trilobite

The trilobite is abundant in the very lowest fossil levels; but according to Levi Setti, it’s eye is said to have ‘possessed the most sophisticated eye lenses ever produced by nature,” which required “knowledge of Fermat’s principle, Abbe’s sine law, Snell’s law of of refraction and the optics of birefringent crystal.” He concludes: “The lenses look like they were designed by a physicist.”

Trilobites have been extinct since before the age of Dinosaurs, but some living creatures bear such close superficial resemblance to trilobites that they cause great excitement when encountered. … Alas, no living trilobite has ever truly been documented.