Origins – How the World Came to Be 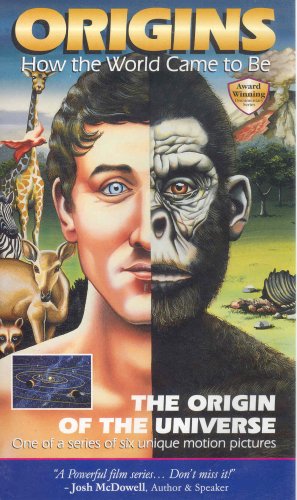 Origins – How the World Came to Be, shows Scientific Evidence for a Creator. In their quest for truth about our planet’s ancient past, modern scientists come face to face with dramatic new evidences concerning our true origins.

Origins – How the World Came to Be is 6 powerful 30 minute films featuring Dr. A.E. Wilder Smith, prolific author and highly respected scholar, educator and international speaker with three earned doctorates from prestigious universities and many other outstanding men of science).

One of the most important issues challenging Biblical Christianity and evangelism is science’s supposed disproof of the foundational book of Genesis. The six-part award-winning ORIGINS series provides exceptionally vivid and easy-to-understand scientific evidence for Creation. Includes special effects, animation and around the world photography.

1.The Origin of the Universe: Did our universe result from a “big bang” or an “intelligent designer?” Is it too complex and well-designed to have originated by time and chance? Demonstrates the impossibility of Evolution. The cosmos is degenerating, not evolving upward.

2.The Earth, A Young Planet: Is Earth billions of years old? Although the general public does not realize it, there is much evidence that our earth may be relatively young. This motion picture exposes the problems and assumptions of important evolutionary dating methods. A real eye-opener.

3.The Origin of Life: How did life begin? What have attempts to produce life in the lab proven? Even the simplest cell cannot evolve by time and chance. Illustrates the impossibility of Evolution. Leaves audiences in awe of the superb design of DNA, the human brain and all living things!

4.The Origin of Species: Did all life evolve upward through a common family tree? Evidence indicates that living things cannot evolve by mutations, natural selection or any other means. Provides faith-strengthening evidence for divine creation. (Partially filmed in Darwin’s own home.)

5.The Origin of Mankind: Did we evolve from ape-like creatures? This film uncovers errors, hoaxes and misinformation about “missing links” and “ape-men.” There is still no solid evidence that humans evolved from animals. Evidence suggests that man has existed from the beginning.

Go back to Media Available.