Termites are Blind with No Brains; Yet They Build Skyscrapers with Air-Conditioning! 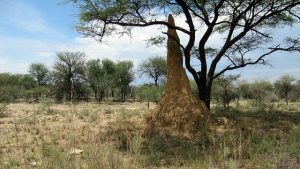 Image by bernswaelz from Pixabay

It all starts with two termites, a king and queen. They lay eggs, but never teach their offspring anything. How can they, when they have almost no brains and are all blind?

Working together the young build large termite towers, part of which rise as much as 20 feet in the air. Each side may be 12 feet across. The narrow part lies north and south, so the tower receives warmth in the morning and late afternoon, but less in the heat of midday. Scientists have discovered that they build in relation to magnetic north.

Because it rains heavily at times, the towers have conical roofs and sides sloping from smaller at the top to larger at the bottom. The eaves of the towers project outward, so the rain cascades off of them and falls away from the base of the tower. That takes more thinking than a termite is able to give to the project.

When they enlarge their homes, they go up through the roof and add new towers and minarets grouped around a central sphere. The whole thing looks like a castle. In this tower is to be found floor after floor of nursery sections, fungus gardens, food storerooms, and other areas, including the royal chambers where the king and queen live. If termites were the size of humans, their residential/office/building/factory complex would be a mile high. Yet these are tiny, blind creatures, the size and intelligence of worms.

Then there is the air-conditioning system. In the center of the cavernous below-ground floor is a massive clay pillar, supporting the ceiling of this cellar. Here is where their central Air Conditioning System Processor is located. It consists of a spiral of rings of thin vertical vanes, up to 6 inches deep, centered around the pillar, spiraling outward. The coils of each row of the spiral are only an inch or so apart. The lower edge of the vanes have holes ti increase the flow of air around them. The vanes cool the air, and a network of flues carries the hot air down to the cellar.

From high up in the tower these ventilating shafts down downward. But carbon dioxide must be exchanged for oxygen, which the few, guarded entrances cannot provide. So the top of the flues butt against special very porous earthen material in the top walls of the tower, just inside the projecting eaves. Fresh air is thus carried throughout the towers by the ventilating system.

Blind Termites with No Brains; Yet They Build Skyscrapers with Air-Conditioning!

Warm Blooded Creatures That Have – a “Counter-Current Exchange”