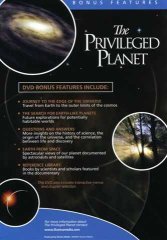 The Privileged Planet, by Ilustra Media Presents the Search For Purpose in the Universe.

B. Chapter Search: (see titles and times below)

* Journey to the Edge of the Universe: Video trip through space with commentary. (6:55)

* Questions and Answers: Excellent material; video interviews with notable scientists:
1. Does the monotheistic tradition of an intelligible universe have any impact on modern science? (1:17)

3. Is there any connection between the beliefs of Nicholas Copernicus and the Copernican Principle? (1:05)

5.All of the galaxies in the universe are receding from each other. What are the implications of this fact? (1:02)

6.Astronomer Robert Jastrow discusses his views on the origin of the universe. (1:30)

8.What are the primary naturalistic explanations for the fine-tuning of the universe? (2:23)

9.From a scientific perspective, what are the problems with the hypothesis of multiple universes? (0:35)

10.If life is discovered somewhere else in the universe, is it likely to be carbon based? (1:10)

11.What objections has the hypothesis of a correlation between complex life and scientific discovery received? (2:13)

12.In what sense is Earth optimized for scientific discovery? (1:43)

13.Is the hypothesis of a correlation between life and discovery based upon empirical evidence or metaphysical philosophy? (1:12)

14.Will there be future opportunities to test this hypothesis? (0:56)

“The most habitable places in the universe also offer the best opportunity for scientific discovery. I believe this implies purpose” Guillermo Gonzolez – Astrobiologist

Many scientists have claimed that Earth is an ordinary speck of dust adrift, without purpose or significance, in a vast cosmic sea. Yet current astronomical evidence seems to suggest just the opposite.

We now know that a rare and finely tuned array of factors makes Earth suitable for complex life. We depend on our planet’s oxygen-rich atmosphere, its large moon, its planetary neighbors, and its precise location within our solar system and Milky way galaxy. But there is more. The same factors that that make a planet like Earth hospitable for life also provide the best conditions for scientific discovery.

Through stunning computer animation, interviews with leading scientists and spectacular images of Earth and the cosmos, The Privileged Planet explores a startling connection between our capacity to survive and our ability to observe and understand the universe.

Is this correlation merely a coincidence? Or does it point to a deeper truth abput purpose and intelligent design within the cosmos?

Narrated by John Rhys-Davies (The Lord of the Rings)

Back to Media Available