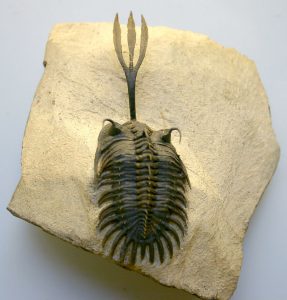 fossil of a trilobite

The trilobite is abundant in the very lowest fossil levels; but according to Levi Setti, it’s eye is said to have ‘possessed the most sophisticated eye lenses ever produced by nature,” which required “knowledge of Fermat’s principle, Abbe’s sine law, Snell’s law of of refraction and the optics of birefringent crystal.” He concludes: “The lenses look like they were designed by a physicist.”

Trilobites have been extinct since before the age of Dinosaurs, but some living creatures bear such close superficial resemblance to trilobites that they cause great excitement when encountered. … Alas, no living trilobite has ever truly been documented.

What? Their Kidney is in Front of their Mouth?