With God All Things Are Possible!

But Jesus looked at them and said, “With man this is impossible, but with God all things are possible.” Matthew 19:26

Dear Praying Friends,
We praise God for the many blessings that He has showered upon us these past months as we started getting into ministry again. He has been at work in ways beyond our expectations, showing us again that with Him all things are possible, that He is almighty God, the God of miracles.

One area where we have seen God at work is in Cathy’s health. In the last half year or so that we were still in Canada she got some chiropractic treatments that God used to cancel her issues with gluten. Since last summer she has been eating “normally” again and is doing fine with that. That alone was a huge praise, but God had even more in store for her. While we were in Canada her thyroid levels were all over the place, never where they should be. In the beginning of December we had them checked again and to our great surprise, the results were as perfect as they could be. The doctor, a believer, told us that God had done a miracle and he challenged us to believe that. Cathy’s response was “Lord, I believe; help my unbelief.”

Since she had her complete thyroid removed in 2008, medically speaking she should be on thyroid meds for life and we had never considered that it could be otherwise. However, she decided to find out whether God had done a miracle, so she stopped taking the thyroid medication. Two months later she is doing fine without the medication. In fact, in December when things got very busy for her, God gave her a spurt of energy such as she had not had in 13 years! On top of that, God healed her vocal cords which had been damaged by the growing thyroid. 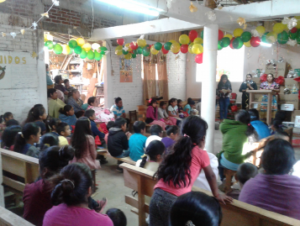 The pastor of Angahuan asked whether she could get a worship team going. The first Sunday that she led worship her voice almost gave out after a few songs, but after that she was able to practice singing with the other ladies for an hour and her voice was as strong as ever! This after 13 years of hardly being able to sing because her vocal cords tired very quickly. We had never experienced such evident miracles of health and we praise God for His work on Cathy’s behalf.

God has also been at work in other ways. When we started re-connecting with the church in Angahuan the atmosphere there was one of  discouragement and a sense of grief concerning the split that took place a couple of years ago. Apart from the pastor and his family there were few that were still faithful attenders and even fewer potential leaders. The pastor felt very much alone and overwhelmed with the ministry there.

Needless to say, he and his family were so glad that we were back to support and encourage them. Pete started preaching quite regularly and we also started supporting them with visitation.